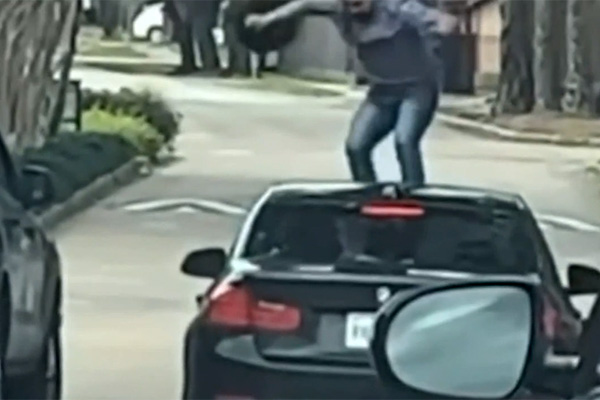 “Brittnay Wilson said a man recently followed her on I-10 for miles and later broke her front windshield. Now, she wants that man to be held accountable for his actions.

When this all unfolded, Wilson said she was in fight-or-flight mode. She managed to grab a wine bottle out of the man’s passenger seat to protect herself.

“I went into his car and grabbed whatever I could find,” she said.

That’s when the man came back for more, jumping on her car and breaking her front windshield.

“At this point, I put my head down because glass came all in my face,” Wilson said. “It was really thick, the whole windshield was caved in it.”

Read more about this story here.

In the video we see Wilson, who is an army specialist, confront the man outside their vehicles. According to her, the encounter started when she merged in front of him on the highway. At that point, he followed her for several miles and ultimately jumped on her windshield in a fit of rage.

Unfortunately, road rage can happen for no apparent reason at all. The best advice when dealing with an aggravated driver is to drive to a safe location and do not engage with the other individual. If your vehicle or windshield is damaged due to such an incident call us at 952-797-4374 for mobile windshield service at no extra cost.

If your windshield is egged while driving can you use your wipers?