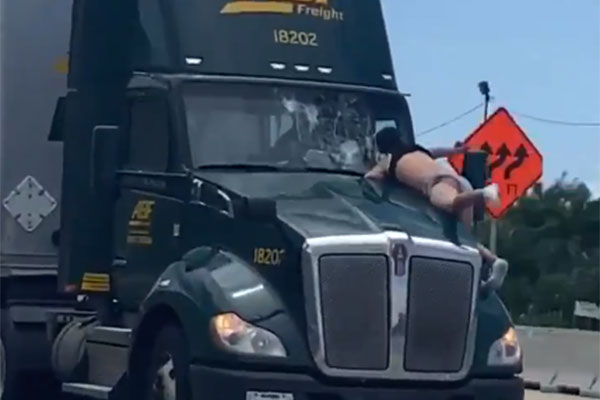 “A man clinging to the hood of a semi-trailer truck isn’t something one normally sees while driving on a highway.

Even in the state of Florida.

In a viral video that’s been viewed more 4.7 million times, a man can be seen riding on the hood of a semi-tractor trailer truck while it travelled down I-95 in Boyton Beach, Fla this past Saturday.

News outlet WPLG reported Florida Highway Patrol received a call from the passenger of a Toyota SUV early Saturday afternoon about a man he was driving “acting strange.” According to state troopers, the passenger said the driver then stopped on the southbound ramp of the Florida turnpike, got out of his car and began walking on the highway.”

Check out the full story here.

The video clip played out like a scene from a hollywood action movie. In fact, you can see that the truck driver, who is clearly startled, try to shake the clinging man off of his hood. Fortunately, a state trooper came over to assist in the situation and the driver complied by pulling over. Afterward, the hood jumper was taken to a local hospital for evaluation.

At IAS Auto Glass, we service semi-truck and other commercial vehicles for their auto glass needs. Whether you sustained damage to your windshield through an act of malice or otherwise, our speedy process will have you back on the road in no time. Call us at 952-797-4374 or visit our auto glass repair page for more information.